Eliminating the vote-a-rama, making it tougher to waive budget points of order and creating enforceable, long-term fiscal targets are among ideas for overhauling the budget process that Senate Budget Chairman Michael B. Enzi will unveil Wednesday, according to a document obtained by CQ.

Moreover, the Wyoming Republican is saying these concepts have gained some level of bipartisan support on the committee. An aide said Enzi still wants to mark up budget process overhaul legislation before the end of the year. 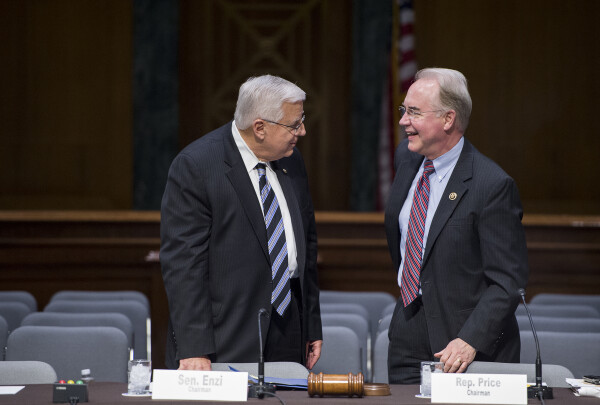 Enzi plans to take to the floor to address the Senate on a budget overhaul on Wednesday morning, and also release the list of proposals the same day. A committee aide verified the document obtained by CQ on Tuesday night.

The announcement, while not the complete budget redo bill that Enzi plans to release later this year, follows a series of hearings he convened  to review the budget process and listen to experts discuss how to change it.

Since the hearings ended, Enzi has been working with Sen.Sheldon Whitehouse, D-R.I., and meeting behind closed doors with committee members to determine the best path forward for bipartisan legislation.

“The last time Congress comprehensively reformed the budget process was in 1974. Times have changed and the 40-year-old process has only grown more dysfunctional and antiquated,” Enzi writes in the document. “Recent years have shown that budget dysfunction creates crippling uncertainty and leads to bad fiscal policy.”

The committee’s official release of the six-page paper will set the tone for what Enzi hopes to accomplish later this year when he plans to release and mark up an overhaul bill.

The announcement represents a step forward for Enzi, who has steadily pushed back the release date for a budget overhaul bill. Even with his timeline shrinking, Enzi remains focused on changing what he often calls a “broken” annual budget process.

“It is time for Congress to fix America’s broken budget process,” the document reads.

He says the proposals are “bipartisan, common-sense solutions that will place our country on a better, more sustainable fiscal path.”

During the four hearings Enzi convened in April, he repeatedly said he wanted to move a bill through the Senate floor before the November elections. With a seven-week congressional recess slated to begin next week, his best window to seek floor time would be during early September.

Congress would have just returned from its summer recess. And while leadership will be negotiating the terms of a continuing resolution before the end of the fiscal year on Sept. 30, there may not be many appropriations bills being debated on the Senate floor if Democrats continue to object to them.

How far the measure could move in the House remains to be seen.

House Budget Committee Chairman Tom Price, R-Ga., has been holding hearings on the budget process for several weeks, but does not want to move legislation this year. Instead, he wants to wait for a new administration to undertake a re-write of the 1974 Budget Act.